Java Developers: How to Avoid a Flood of Irrelevant Job Offers?

Java developers receive a huge number of job offers; so many, in fact, that they often feel like hiding so that they are no longer contacted. As a result, the gap between supply and demand is widening, to the point of creating a real shortage on the Belgian market. How has this happened? And what are the solutions?

The most wanted people in the IT sector

Whether in the United States, France or Belgium, there are not enough developers to meet the ever-increasing demand. Our country alone needs an extra 16,000 encoders.

Why is there such a gap? Some might claim that it’s due to an inaccurate image of the profession and the "geek" cliché, while others might say it’s the result of a lack of appropriate training, or the fact that the level of experience sought is often quite high.

Many developers testify to the aforementioned overload of job offers, as can be seen on the forum Reddit. 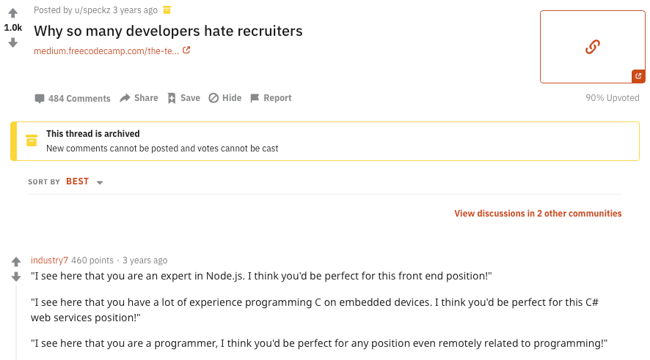 From the lively discussion, two key points stand out:

With regard to unsuitable offers, junior developers often receive opportunities such as "Director of Engineering" or "Senior Software Architect". The majority of the job offers sent do not match the profile or skills of the targeted Java developers. One developer recounted a time when he was offered a manual job in an automobile factory because he had mentioned his interest in machine learning. This leads to frustration, mistrust and even withdrawal.

Are all recruiters the same?

However, it is important to make a distinction. As some people point out:

"I love recruiters. Recruiters often get you a job much faster and easier than you would if you were looking on your own.”

Another developer added, while expressing a disadvantage:

"I got my current job after receiving an email from a recruiter, and the guy was brilliant. (...) Conversely (...) this week I was contacted by a guy who called me three times, sent me two emails and two texts, in two days (...) to the point that over the past few months, I haven't answered to any numbers I didn't recognise.”

Work with an agency that’s focused on your needs

The world is imperfect, and the professional sphere is even more so. How can you make sure to find the right people when looking for a job? Fortunately, initiatives are being put in place by agencies that truly believe in taking a humane approach to the process. Choose to work with a team of IT experts who understand your business in depth. With over fifteen years' experience in the IT sector, MyNextCompany has developed advanced and powerful technical tools, especially for developers. Among these, there is a tool that allows developers to update their availability, offering them financial protection while guaranteeing them a choice of missions adapted to their skills.

A job search in complete discretion

You don’t need to update your Linkedin profile: now, new ways are being created to allow developers to find their next mission easily and discreetly. Indeed, an increasing number of applications are being launched all over the world, which aim to uberise recruitment. In Belgium, the platform mynextcompany.io is taking on the challenge. It is based on the principle of Tinder's Like-Match-Chat, but applied to a job search:

This platform will help you to keep a low profile and avoid being contacted about jobs that do not match your wishes and qualifications. Scheduled to enter the Belgian market in early 2020, it is currently in beta-testing. Are you a developer? Click on the button below to test the tool as a preview!

Nico is a true people leader and a talent whisperer. Has been in recruitment since before you could say “1999." After work, you will see him cheering for AS Saint-Étienne or on a tatami mat practising martial arts.